…or, at least that’s what my sleepless nights would suggest. It’s 12:44am local. I’ve been up for 90 minutes, and for no good reason. My normal day starts at 0500, so this is some straight-up bullshit for the second time in three nights. A few years ago, I would have only been up at this hour either because I was on-shift hunting what goes bump in the night or because I’d been called into work for the same reason. Two decades before that, I would’ve been up trying to drink the county dry.

I’ve been working toward some advanced degrees programs since August, so my days are wall-to-wall busy. I haven’t had a weekend, much less a real day off since I started all this. During the daylight hours, I can keep my mind off the current state of events, even watching the occasional news broadcast doesn’t make me too anxious. But, at night? That’s when the monsters come out to play.

I don’t consider myself a fearful man. I spent my cop career lurking in the shadows searching for the bad man, the one who thinks he’s the predator. It was my job to find him first, before he claimed another victim. I loved it. But bad men, regardless of their size, they bleed just like me. They can be arrested, punched, even shot or stabbed if it comes to it. I can’t fight a goddamned virus, though, not with any active enthusiasm. Staying isolated from friends and family doesn’t feel helpful. I don’t feel safe, and I don’t feel like I’m doing shit to protect my family. If anything, I’m living this façade and it doesn’t matter if we go to the bar, to a restaurant, to church. It comes for us or it doesn’t, and it feels all out of my control.

How do I know six feet is enough “social distance” when the guy behind me at the grocery store coughs? Did he cover his face with his elbow, or did he just spray my back with CV like an asshole?

My in-laws moved in with us about a year ago, and my father-in-law clears his throat at least two dozen times a day. How is he gonna fare if I bring this shit home from the grocery store? What if we get the groceries delivered now, does that even matter? How many extra hands touched the produce or the canned goods before they get dropped on my doorstep? What about the delivery driver’s car, are his kids sick? What happens to him when they are? Does he have enough time off to take care of them for two weeks, and then stay home for another two or three weeks until he’s in the clear? Who the hell can afford to take five weeks off?

What if my parents get sick? I can’t go visit them, especially if one of us in lockdown by then. What if the last time I saw them becomes the last time?

What about funerals? How are we supposed to honor and respect our dead and fallen if we can’t gather, can’t go outside, can’t congregate in a house of worship? Will they forgive us for not attending their services? Will they know? Will they care?

What’s the right thing to do? If this infection really is so new, how are “experts” simultaneously giving us advice while saying that almost anything’s possible and they don’t know what’s gonna happen, or when this gets better? Flatten the curve. Fuck the curve, I hate the curve.

I understand the general theory and practice of containment, especially if they’re right that this is carried by droplets. I rationally know we’re doing everything we can in our house to keep our family and our neighbors safe. Knowing and understanding that doesn’t make me feel any safer, though. Not when my father-in-law sounds just like the guy in line behind me. I can’t keep the monsters at bay, the ones I can’t swing on or out-maneuver. 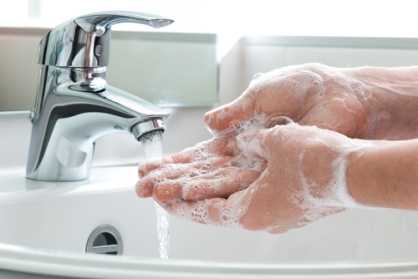 I distinctly remember the last time I felt this helpless. I was eight, my sister was six. Mom and dad just explained what divorce meant, and that we were moving with mom to an apartment. It was supposed to be some kind of adventure, I guess, I don’t really remember their exact words. I had no idea what to do, but I understood I was the man of the house now. I had to protect my mom and my sister, even if I didn’t have a fucking clue about how to do it.

So, here I am, after all these decades. I’m eight years old all over again, waking up in the middle of the night afraid of a boogeyman that might never come for me and mine. And I don’t know what else to do about it…

…so, until further notice, my new handwashing song is “Always Look on the Bright Side of Life.” Thank you, Monty Python, for protecting me and mine.

Stay frosty, my friends, and watch over yourselves and each other. Be safe in there.