I first fell in love with Austria and Bavaria in June, 1994, and Vienna in particular in March, 2001. If we ever meet I person, I promise to tell you the story about the late-night bar over a few drinks. I digress.

I returned for a writer’s retreat in November, 2017, and the city felt more alive than I remembered it. I wandered the streets in the morning and a Christmas market at St. Stephen’s Cathedral at night. I stopped into churches, cathedrals, museums, and coffee shops, and wrote wherever I stopped. About four hours of my writing and notes were inspired by an exhibit at the Austrian Literatur Museum on controlled substances, hallucinogens, and their influence on Austria’s artists.

The city inspired me to begin plotting a still-under-wraps crime series that I hope to release in late 2019 or early 2020. The most inspiring, and awful, memory from my 2017 trip happened on my cab ride from the airport. Somewhere along the A5, a building had been spray painted with “Los Vatos Locos,” a clear reference to the Latin street gangs that have plagued major American cities for generations. Those assholes had migrated across the pond and set up shop. My research later revealed the Latin Kings (of Los Angeles fame) and Mara Salvatrucha 13 (from El Salvador) first became problematic in Europe in the early 2000’s, with their influence and violence only growing each year as the EU and its member nations struggled with how to address and resolve immigrant assimilation issues.

In Austria in particular, the focus on border security had impacted the traditional Balkan drug routes into the European black markets. That, my friends, was the opportunity I needed to start putting this book together. As with any commodity market, one stymied avenue only forces another open. The real-life Balkan route closures allowed my fictional villain to contract with Mexican and South American drug trafficking cartels to transport their narcotics on his cargo ships. Sadly, the drug overdose deaths mentioned in this novel are also based in reality.

As with The Absolver: Rome, all the characters are entirely figments of my imagination. Any references to actual persons are used fictionally and have been clearly identified. Most locations are real and used fictionally, or based on actual locales. I relied equally on my own travel, photographs, and Google Maps to assure accuracy when required. The list of completely fictional locations will be much shorter: Alfred König’s Office (the Tourist Information Center in which it sat is real), Cardinal Paul Dylan’s Vatican residence (although I placed it in a current Catholic church just outside Vatican City), and the two clandestine training camps I placed in Wyoming and Nevada. See? Told you it’d be much shorter.

I might have missed one or two entirely fictional elements, but I believe the remainder of the book’s locations are, to varying degrees, based in reality.

I still assert that I’ve never worked as a secret agent (that’s what we all say, right?), but my thousands of hours of patrol, investigations, and specialized police training incredibly useful in ensuring Michael Thomas has the skills and mindset necessary for his work. I’ve also never been Catholic or a priest, so I partnered with a technical advisor and spent the bulk of my research hours here. I tried not to give away LEO tactics and worked to respectfully include Catholic ritual, paradigm, and dogma. Any errors in either area are entirely my own. 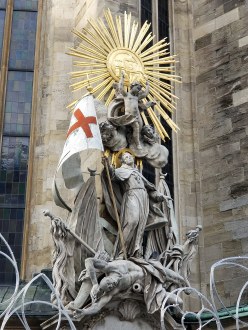 I relied most heavily on the following reference materials: my personal Bible, Summa Theologica by Thomas Aquinas, and Catechism of the Catholic Church (Second Edition), as well as dozens of articles from open-source sites that included National Catholic Register, Worldbank.org, The Independent (UK), Gates of Vienna, World Port Source, IWM.at, and the intelligent analysis from Gatestone Institute.

The feedback and reviews for The Absolver: Rome have been incredibly flattering. I can’t tell you how humbling it is to hear that folks have enjoyed spending time with my characters and their stories. I’m exceptionally grateful for the time and treasure that you all trade for my books, and I work to ensure that you come out on the better end of that deal. I’m looking forward to the first reviews of The Absolver: Vienna and the continuation of what I intend to be a long-running series.

All that said, I, as always, have more words to write and little time in which to transfer them from my imagination. Hope you had a great holiday season and that 2019 is starting off healthy, happy, and prosperous for you and yours!