In advance of the upcoming release of “The Absolver: Rome,” I wanted to give you some insight about how the new series came about, along with my research into a number of conspiracy topics. Beware the rabbit holes, folks, I can tell you that they’re all deeper than they first appear. 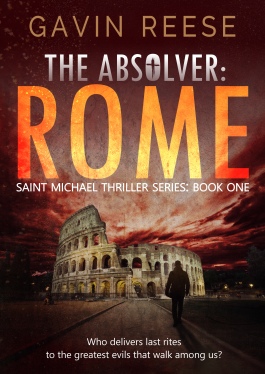 It’s as good a time as any to tell you that Mrs. Reese and I are kinda conspiracy theorists at heart. Not the aluminum-foil-hat kind, mind you. We both believe the moon landing was legit, and…I suddenly can’t come up with a second example of how we’re not that paranoid. Hmm. Just learned something about myself, I think. Speaking for myself, anyway, I’m certain that Oswald wasn’t alone, Norma Jeane Mortenson’s death wasn’t an accident, and we aren’t alone in the Universe. I also hope the Holy Grail really was Mary Magdalen. See? Just like I said. Not that crazy, right?

I don’t recall the exact conversation that started this process, but Mrs. Reese and I were talking about conspiracies in general, I think. She said something off-hand, like, “You should write a book about that.”

(starting gun cracks in the background)

I took her advice and went weapons-grade-obsessed with it. I started with a simple premise: how do priests and clergy officials deal with hearing confessions of heinous crimes, given that they can’t EVER tell the cops what they know? I put myself in their shoes, and now I have to stay 500 yards away from Saint Anthony’s. Not really. 150 feet.

I grew up in Protestant churches, so what I thought I knew about Catholic paradigm and dogma came from ex-girlfriends that tried to get me jumped into their parish and fiction written by outsiders. Not the best, most-objective sources of information given the bias inherent in each group. After a number of purchases, I had a small Catholic library, a devout technical adviser, and a LOT of hours dedicated to reading the Catechism of the Catholic Church, as well as Summa Theologica by Saint Thomas Aquinas, a 12th century monk and philosopher. If you’ve ever heard the term “just war,” that came from him. Well, and his interpretations of the earlier writings of Saint Augustine. But, mostly him. I didn’t read the entire books, mind you, because I wanted to start writing this series in this lifetime. Also, I’m writing a fictional series, not a historical documentary that covers the last thousand years.

Along the way, I realized the central theme of this series would be one that has plagued mankind since Cain and Abel. When is violence justified?  Violence, in all its forms, is hotly contested among the human populace. While some (myself included) believe it solves problems, others will even refuse to defend themselves from attack. Amazing dichotomy, as though we’re different beings!

Then, I started creating the Universe in which this series takes place. I prefer fiction based on reality, even as a reader, so I wanted to make this series force my readers to wonder if its events and characters are possible; I sincerely hope you actually question whether they’re probable! Rather than reinvent that particular wheel, I chose to dump this series into the Alex Landon universe. Not the same places, mind you, but the same time, same world, same physics: modern day America. This shared timeline may come into play later, stay tuned…

Then I tackled the characters. I’ll divulge more on them in forthcoming emails, but for now, here’s the skinny on the MC. Michael Andrew Thomas was born into a devout Catholic family in Santa Fe, New Mexico, on November 1, 1980. He served as an altar boy while he grew up in San Miguel Chapel, which is a tremendous, historic gem in the city! If you ever have the chance to go, treat yourself and spend a few hours there. Michael studied Spanish and Theology in college, interned with a small-town police department, and became a cop after graduation. He pushed a black-and-white around town for a few years, but felt called to serve in a different manner. After much contemplation and prayer, he joined the seminary, became a priest, and spend the next decade serving South American parishioners. It is there that he’s truly forced to confront the thematic question, the one he believed he already knew the answer to: when is violence morally justified? Michael’s subsequent response sets a number of unforeseen and unintended events into motion, none of which he’s prepared to deal with.

I’m incredibly excited about sharing this new series and its characters with you, and I hope you’ll send in your feedback about it. More to come!

5 thoughts on “How I Planned My Conspiracy”