The idea of weather control makes most people either cringe in disbelief or wonder at the possibilities that could be if mankind had the power to make it rain whenever and wherever we wanted.

Weather control, or modification, is defined as the act of intentionally manipulating or altering weather or weather patterns. After many reports from soldiers in the 1800’s that rain fell after every battle, the United States Department of War decided to begin testing this theory. Purchasing and detonating close to $10,000 worth of explosives and gunpowder, their tests proved inconclusive. Testing in the 1950’s, performed by Wilhelm Reich and called ‘cloudbusting’, also did not garner the support of many and is considered controversial by today’s standards.

Yet, many people still quantify weather manipulation as a form of warfare. The most popular subject in this particular conspiracy theory is the HAARP (High Frequency Active Auroral Research) program. Begun in 1990, building of the facility didn’t start until 1993 and is located in Gakona, Alaska. It has been claimed to be the world’s foremost research center for the study of the ionosphere (a layer of transition between the earth’s atmosphere and the magnetosphere), most research being accomplished through exciting small areas of this transitional layer with high-powered HF (high-frequency) waves.

Conspiracy theorists claim that this science station is capable of ‘weaponizing’ weather and can create tsunamis, hurricanes, tornadoes, earthquakes, floods and droughts. If weather control is real, then it is an acute way to flex ones’ might. After all, why would a country send its army to fight for resources when it could simply cause devastation by creating a tornado, earthquake or series of storms designed to cause chaos? Isn’t that simpler than causing destruction to resources in the traditional sense of war?

How awesome would it be to create an earthquake where your enemies are centered? Wouldn’t that place humans in the realm of ‘gods’, giving us the power to control the Earth’s weather? How many farmers would give their soul for a rainstorm in the middle of a drought? The potential is palpable.

The idea of so much power in one place, coupled with the central scheme of all conspiracy theories (that some mysterious, clandestine organization is after full-spectrum dominance) can seem like a much easier pill to swallow to those who are largely uninformed about science in general. The reason it likely garners so much attention and is so readily accepted has to do with the lay-persons understanding of scientific methods and general scientific facts. Almost like showing a Neanderthal a 3-D movie, most people just don’t understand according to scientists; due to this misunderstanding of the technology, it’s easier to accept that it is something felonius rather than adapt to the new knowledge of human capabilities.

While there are people, books and websites dedicated to proving the weapons capabilities of the HAARP facility, the scientific community and the University of Alaska (the owners of the station) offer some very different information. 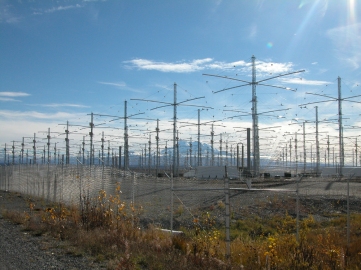 Umran Inan, a Stanford professor, told Popular Science magazine that a lightning strike creates more power than the HAARP facility, and that there is no way humans can control the Earth’s weather systems. Many journalists have laid claims that the potential benefits to science are eclipsed by the sheer popularity of the conspiracy theory, and that perhaps it has something to do with the way that particular facility functions, because it is not ‘open’ to the public the way many government research stations are.

The US government turned over control of the HAARP facility to the University of Alaska Fairbanks Geophysical Institute in 2015 (which now allows researchers to buy time there) and they have an annual ‘open house’ to allow the public to tour and view the facilities to combat the negative perception from the general population.