There are a lot of tough realities about the police profession that everyone keeps forgetting to add to the recruiting videos.  One that’s recently come to mind is the fact that most of our personal contributions, sacrifice, and toil have the permanence of dry sand castles just before a rising tide.

Every time a cop leaves, moves agencies, or retires, it takes all of about 18 minutes for the rest of the department to forget they ever worked there.  It’s not quite that bad, but you can see it from there.  I’ve been part of actual conversations where a colleague and I are talking about a case, a specific incident, or reliving some shenanigans; another cop’s name will come up who’s left the agency and my colleague says something like, “Hey, speaking of [Enter Name Here], I haven’t seen ‘em around for a while, they on vacation?”  I look at them, explain {Enter Name Here] left days, weeks, or months ago and moved to [distant city].   “Nawwww, really?  That asshole never returned my [expensive and rarely used tool]!” 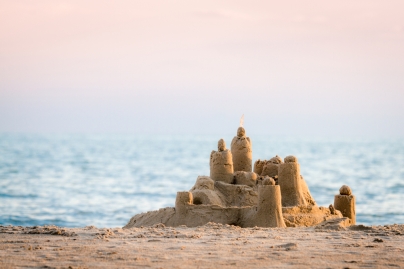 So, as one of my preferred shift partners has recently gone to work for another agency and another has gone back into civilian employment, I’ve been reminded that everything they accomplished and worked on likely won’t stand for long.  Their projects and ancillary assignments, once turned over to someone else, have already been significantly changed.  They built a sandcastle destined to survive only as long as they were around to maintain it, protect it, and keep it from drying out and crumbling.  As soon as they leave, the rising tide and a mean, unsupervised fat kid compete to define its life expectancy.

It’s actually been a good reminder for me to limit the emotional investment I make into this job and into the “mark” I’ll someday leave behind.  My projects, courses and training materials, they’re all waiting to be washed to sea by the next guy who’s less competent, less capable, or less concerned.  So, how do we create lasting change and know that our efforts were worth the blood, sweat, tears, and time we sacrificed and traded away for them?  Invest in our people, not in our processes.

One of my mentors was killed a few years ago and this realization has helped me process my grief and his absence.  He invested heavily in me, my training, my skills, and my perspective on the job.  I miss him frequently and think of him often when I’m training.  He will live on as long as I train cops, who train future cops, who eventually become trainers themselves.  Our legacies are not made on politics, policies, practices, or PowerPoints.  Our legacies are built in the people (“the other ‘p’?”) in whom we’ve invested our time and expertise, and routinely encouraged to do the right thing, at the right time, for the right reasons.  Anything less than that won’t survive the next high tide.   For my part, I’d like to be remembered for more than the unreturned tools.