Hi everyone. Today is the launch of the second book in the Enemies Series – Enemies Foreign. 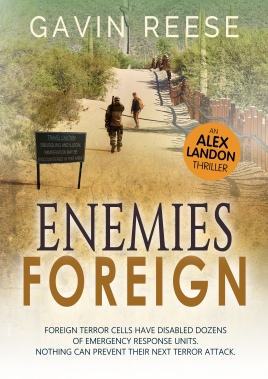 Foreign terror cells have disabled dozens of emergency response units. Nothing can prevent their next terror attack.

While following leads to identify and arrest an international drug trafficker, Detective Alex Landon is called to lead a mass murder investigation after the unholy marriage of a drug trafficking cartel and the Taliban has a less-than-amicable beginning. A lone witness claims to have heard two last words that strike fear in heart of everyone involved: “Allah Akbar!”

When critical police, fire, and emergency personnel across the Phoenix Valley are simultaneously accused of heinous crimes and immediately suspended from duty, Detective Landon knows their attack is imminent and he’s run out of time to stop it.

Available now in Kindle and Paperback. Hardback and Audio on their way!

PLUS – You can win a signed copy by entering the Goodreads Giveaway. Just click the image below. Good luck!